Environmental protection review (EPR) reports offer a summary of CNSC staff’s technical assessment of how effectively licensees are protecting human health and the environment in the communities in which they are operating.

The Point Lepreau Nuclear Generating Station (Point Lepreau NGS) lies within the traditional and treaty territories of the Maliseet, Mi’kmaq and Peskotomuhkati Nations. The facility is located on the northern coast of the Bay of Fundy, on the Lepreau Peninsula, approximately 40 km southwest of Saint John, New Brunswick. Owned and operated by NB Power, the site houses several facilities associated with the production of energy, including a single nuclear reactor, as well as a nuclear waste management facility located northeast of the nuclear generating station within the site perimeter.

The summary that follows highlights key areas of interest from the environmental protection review (EPR) report for the Point Lepreau NGS. It represents only some of the information presented in the full report.

The purpose of the report is to share CNSC staff’s findings from the review of NB Power’s environmental protection and environmental compliance activities. This includes any possible environmental releases as part of normal operations and the risks that radiological or hazardous substances pose to the environment and human health. The report draws on information provided by NB Power and CNSC staff’s technical assessments, including:

Overall, CNSC staff found that NB Power continues to implement and maintain effective environmental protection measures to adequately protect the environment and the health of people working in and living around the site. CNSC staff found that the potential risks to the environment from any of the releases observed over the last 5 years are similar to natural background levels and that any health risk is indistinguishable to that experienced by the general public in other parts of the province.

In the nuclear industry, any kind of contaminant emitted by a facility is called a release. This report looks at different kinds of releases and their possible impacts on the land, air and water in the area surrounding the Lepreau Peninsula, as well as any potential impact on human health.

The graphic below illustrates how a release may reach the environment through what’s called exposure pathways. In the case of the Point Lepreau NGS, this graphic is a simplified representation of the facility and different types of releases—such as emissions in the air or effluent in the water—and the human and ecological receptors that may interact with the releases. 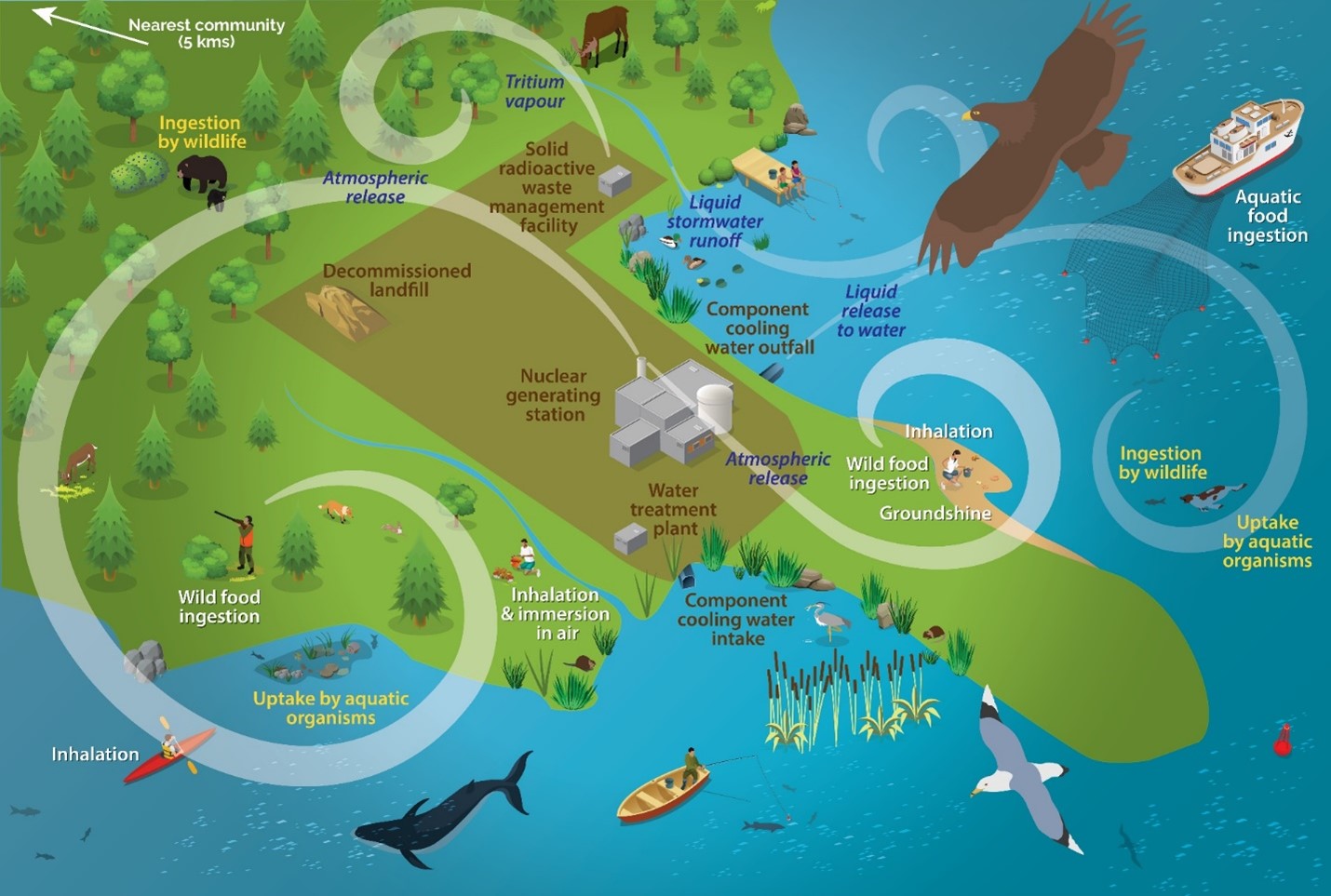 Figure 1– Text description: This diagram illustrates the different potential exposure pathways a release from the Point Lepreau NGS may use to reach the environment and humans.

NB Power must monitor its releases and measure them against pre-established limits. It then reports its results to the CNSC and other levels of government. The CNSC verifies this data by conducting reviews and inspections of NB Power’s environmental protection programs as well as by using mechanisms such as the IEMP.

Under the IEMP, CNSC staff take samples, such as air, water, soil, sediment, vegetation, or some local food like meat or vegetables, from public areas near nuclear facilities. These areas may include parks, farmland and beaches. The samples are then tested at the CNSC’s own laboratory for contaminants related to each facility's operations.

CNSC staff conducted IEMP sampling around the Lepreau Penisula in in 2014, 2015, 2016, 2017 and 2020. Due to COVID-19 pandemic, some of the planned sampling from 2020, including air samples, had to be completed in September 2021. As part of the latest sampling campaign, Wolastoqey Nation and Mi'gmawe'l Tplu'taqnn Inc. community came together to locate and identify medicinal plants and local seafood consumed by their community members. CNSC staff incorporated a range of these recommended plants, such as cedar, Labrador tea, sweet grass as well as a variety of seafood, periwinkles, clams and lobster, into the sampling plan.

CNSC laboratory specialists measured radionuclide concentrations in the samples. The levels of gross gamma, gross beta and alpha, tritium and organically bound tritium in all of the samples collected in 2020 were below available guidelines and CNSC screening levels, and were similar to the range of results seen in previous years. Our IEMP page has more information, including detailed sampling results.

NB Power controls and monitors airborne emissions that come from operations at the Point Lepreau NGS, including light fuel oil consumption, diesel fuel oil combustion and the ventilation stack located on the nuclear reactor. In addition to tracking green house gases and other airborne pollutants, such as carbon dioxide (CO2) and sulphur dioxide (SO2), NB Power also measures their radiological releases to the atmosphere, including carbon-14 and iodine-131.

The monitoring results show that air emissions were consistently below release limits during the monitoring period. As a result, CNSC staff found that NB Power continues to provide adequate protection of people and the environment.

NB Power controls and monitors waterborne effluent from the Point Lepreau NGS to the environment, including releases from the domestic wastewater treated at the sewage treatment plant and the discharge point of the condenser cooling water duct into the Bay of Fundy. In terms of waterborne radiological releases from the site, the released effluent could emit tritium, carbon-14, gross alpha and gross beta to surface water.

The monitoring results show that water releases (treated liquid effluent) were consistently below release limits during the monitoring period. As a result, CNSC staff found that NB Power’s treatment of liquid effluent is providing appropriate protection to people and the environment around the Bay of Fundy.

When ionizing radiation penetrates the human body or an object, it deposits energy. The energy absorbed from exposure to radiation is called a dose. Under the CNSC’s regulations, the maximum dose limit to a member of the public is 1 mSv (millisievert) per year. This is well below levels where any measurable health effect would occur.

To calculate the effective dose to people living near the site, NB Power assessed the risk to representative persons who had the potential to be the most exposed to contaminants—local residents of various ages (adult, child, infant) and an adult diver.

NB Power also considered how the residents could be exposed to radiological substances, such as drinking and bathing in water from a well, and consuming local game meat and fish, crops and wild berries as a portion of their diet. The diver is assumed to live far from the site, but comes to the site for work, and dives in the ocean for sea urchins, harvests clams and sediment, and consumes local fish.

The evaluation, which was based on maximum measured concentrations and other conservative assumptions, resulted in the following total dose estimates:

Given that all estimates are well below the public dose limit of 1 mSv per year, CNSC staff found that radiological emissions from the Point Lepreau NGS pose a negligible risk to human health.

Reviewing and conducting health studies is another way CNSC staff ensure that the people living near nuclear facilities are protected. Population and community health studies indicate that the leading chronic health conditions among the population of St. George, Grand Manan and the Blacks Harbour Area—the communities located nearest to the Point Lepreau NGS—include high blood pressure (or hypertension) and arthritis, with rates that are comparable to the provincial averages. While cancer is one of the most commonly diagnosed chronic diseases in New Brunswick and the leading cause of death, the trends in the province are similar to those seen across Canada.

Based on exposure and health data, CNSC staff have not observed and do not expect to observe any adverse health outcomes to people in the area due to operations at the Point Lepreau NGS.