In Canada, 48% of the radiation we will be exposed to in our lifetimes will come from medical procedures. Exposure to the sun and the naturally radioactive isotopes in the soil, air, food and water will account for 99% of the rest.

Every day, ionizing radiation is used to treat and diagnose diseases. The use of ionizing radiation to treat diseases is known as radiotherapy, while the use of radioisotopes for diagnostic purposes is referred to as nuclear medicine imaging. The Canadian Nuclear Safety Commission (CNSC) regulates all nuclear substances in Canada, including the use of radioisotopes and linear accelerators in medicine.

This is the most common form of radiotherapy used for the treatment of cancer. A high energy beam of X-rays or gamma rays is directed at the tumour. The beams are produced by medical linear accelerators or by devices containing one or more high-activity, sealed radiation sources. The total radiation dose is usually "fractionated" into multiple treatments, delivered over a period of several weeks.

Also called radiosurgery, this procedure utilizes highly focused external beams of X-rays or gamma rays to destroy small target tissues (such as metastases or arteriovenous malformations) while preserving adjacent normal tissue, without the need for a surgical incision. The total dose is typically delivered in a single treatment.

A device called a "brachytherapy remote afterloader" positions high-activity, sealed radiation sources at several locations near or within the tumour for a short period of time. The sources are then removed.

The tumour is implanted with 80 to 120 low-activity radioactive "seeds". These seeds remain within the patient and decay to background levels within about two years.

Radioactive materials are ingested or injected into the patient. This is used to treat thyroid cancer, to relieve pain, or to treat cancers that have already spread throughout the body.

A patient is injected with (or inhales or consumes) a positron-emitting radioisotope. These positrons then combine with electrons to form two gamma rays which travel in opposite directions. A gamma camera tracks them to create a 3D model of the movement and absorption of the radioisotope within the body. 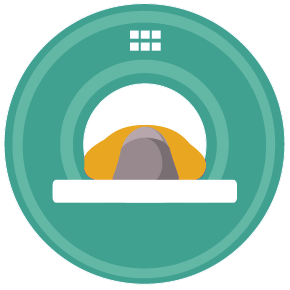 Imaging accounts for the use of 90% of all medical radioisotopes.

These green and yellow cubes represent the comparative radiation doses you receive from natural sources and from medical procedures.

The grey cubes represent dose sizes that can potentially affect your health.

Lowest dose which may cause symptoms of radiation sickness (e.g, nausea, vomiting) if received within 24 hours

This tells us: How many atoms are "decaying" per second?

This tells us: How much radiation am I exposed to?

This unit is used to calculate absorbed dose. The calculation is affected by the amount of time you spent being exposed, how much distance there was between you and the source, and by what shielding there was was, if any.

This tells us: What effect will this exposure have on me?

This unit is used to calculate equivalent dose and effective dose. Equivalent dose takes into account the mass, charge, and energy of the particles involved.

Effective dose then further adjusts this result by what body part was exposed. Some parts are more sensitive to radiation than others, so a weighted number for each body part is applied. effective dose determines your increased risk of developing cancer in the future.

The more time you spend near a radioactive source, the more your body is exposed to the radiation emitted by that source. Minimizing the time spent near radioactive material reduces your dose.

As your distance from the source increases, the radiation it emits becomes more diffuse, just as the light from a lightbulb becomes dimmer the further you get from the bulb. Doubling your distance from a source reduces the dose to ¼ of what it would have been. This effect is known as the "inverse square law".

Different materials may be needed to block different types of radiation. In addition, the more energy a particular radiation has, the greater the thickness of material required. Gamma rays are most effectively shielded by dense, heavy materials such as concrete or lead. High-energy beta particles can be effectively blocked by materials such as glass or plastic. Alpha particles only travel a few centimetres in air and can be completely blocked by a simple piece of paper. 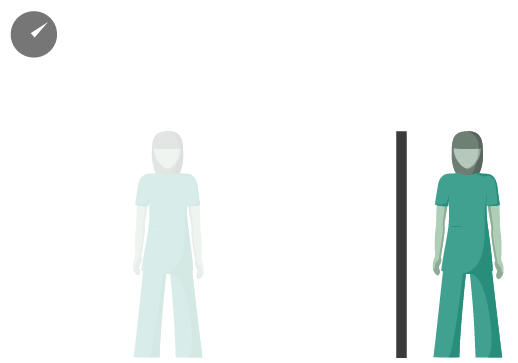 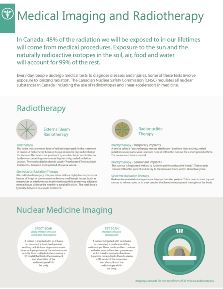 In Canada, 48% of the radiation we will be exposed to in our lifetimes will come from medical procedures. This infographic features information nuclear medicine imaging and radiotherapy.