The disaster at the Fukushima Daiichi nuclear power plant raised many questions about emergency planning and decision making with respect to keeping people safe from the radiation released during an accident. The Japanese people were familiar with the annual public dose limit of 1 millisievert (mSv) and understood it was keeping them safe. After the accident, they were confused when told it was fine to return home, even at a dose of potentially 20 mSv per year. What changed? This fact sheet explores the concept of dose limits – what they are, what they are not, and their place during emergencies.

What is a dose of radiation?

When ionizing radiation penetrates the human body, it deposits energy. The energy absorbed from exposure to radiation is called a dose. This energy can potentially damage cells in the body and these damaged cells may be the first steps in cancer development. Cancer is the main human health effect of concern from radiation exposure.

The Canadian Nuclear Safety Commission (CNSC) follows the recommendations of the International Commission on Radiological Protection (ICRP), which includes some of the world's leading scientists and other professionals in the field of radiation protection. The ICRP uses scientific findings and societal judgments in the development of acceptable radiation dose limits. 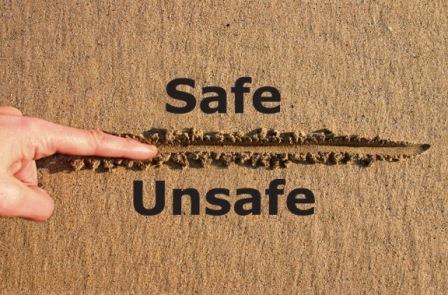 In Canada, the yearly dose limit for persons who are not nuclear energy workers (referred to here as members of the public) is 1 mSv, as set out in the Radiation Protection Regulations. The limit applies to individual exposures that may occur as a result of authorized activities that are carried out in accordance with a CNSC licence.

Dose limits have mistakenly been regarded as the line between what is safe and what is not safe. The dose limit of 1 mSv per year is a regulatory limit – not a health limit. It considers the scientific evidence on the health effects of radiation, as well as societal and value judgments regarding both the risks of exposure and benefits of licensed activities.

In addition to taking measures that ensure dose limits are not reached, licensees must adopt practices that further minimize doses.

What happens in an emergency? 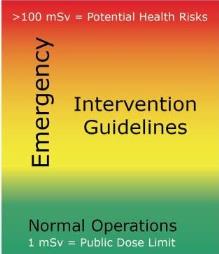 During a nuclear emergency, measures other than dose limits – such as "intervention guidelines" also referred to as "protective actions" – come into play. Intervention guidelines are the steps and actions followed during a nuclear emergency to protect the public; they are based on international benchmarks established with the objective that the actions taken will result in more good than harm. Typical interventions include restrictions on food and water consumption, the direction to take potassium iodide pills, the direction to shelter in place and, in some cases, the direction to evacuate or, in extreme cases, to relocate. It is important to note that intervention guidelines are recommendations and are therefore flexible. They are based on the concept of "averted" dose (how much dose would be avoided by taking the action) or "projected" dose (the dose that might be received if no action is taken).

Decision-makers in emergency planning and response know that, in emergency situations, the societal and economic cost of avoiding dose can be very high. For example, during an emergency it could be more harmful to evacuate rather than to allow the population to receive a higher radiation dose than normal. Avoiding radiation exposure could cause significant disruption, such as permanent resettling following an evacuation – which could lead to loss of homes, farmland, food supply and income. There are some populations in Japan, for example, that continue to be affected by the stress of the Fukushima evacuation. Based on lessons learned from the Chernobyl experience, it is clear that those affected may need long-term assistance and support due to the stress caused by the accident and its consequences.

What's important to realize is that while the doses received by members of the public during an emergency may be higher than those received during normal conditions, they are managed through the implementation of protective actions to remain below harmful levels. Whether in normal conditions or during emergencies, the CNSC and other federal and provincial bodies ensure the public's safety by limiting exposure to ionizing radiation. A blend of scientific information and societal judgments are used to decide the path of minimal harm for the affected population.