The Convention on Nuclear Safety (the Convention) commits signatory states that operate nuclear power plants to maintain a high level of safety.

Canada was one of the first signatories - known as Contracting Parties - of the Convention, and has been one of the staunchest promoters and supporters of its objectives.

The Convention was adopted in Vienna in June 1994.

The document was put together through a series of expert-level meetings and work by governments, national nuclear safety authorities and the International Atomic Energy Agency (IAEA).

Its provisions cover several areas, including siting, design, construction, operation, the availability of adequate financial and human resources, the assessment and verification of safety, quality assurance, and emergency preparedness.

The Convention is not designed for controls and sanctions, but is based on the participating states' common interest to achieve higher levels of safety, as developed and promoted through regular meetings, called review meetings.

The Convention asks each participating state to submit national reports on the implementation of its obligations for peer review, during these review meetings held in Vienna every three years.

The reports presented at the triennial regular meetings and at extraordinary (special) meetings demonstrate our country's firm commitment to nuclear safety through the Convention's three main objectives:

These convention reports describe the systematic monitoring of safety-related programs and their implementation in Canada.

The CNSC, which regulates the use of nuclear energy and materials to protect health, safety, security and the environment, submits the reports on behalf of Canada.

The eighth Canadian report demonstrates how Canada continued to meet its obligations under the terms of the Convention during the reporting period from April 2016 to March 2019.

The Seventh Review Meeting for the Convention on Nuclear Safety was held in March 27 to April 7, 2017 in Vienna. The report demonstrates how Canada continues to meet the obligations of the Convention.

Canada’s seventh report outlines the various measures that are in place to assure the safe operation of nuclear power plants in Canada and the protection of the health and safety of people and the environment. These include a robust nuclear regulatory framework, a mature and effective regulator, and licensee organizations that are fully committed to nuclear safety. The report also emphasizes Canada’s commitment to openness and transparency, research and development, peer review, and continual improvement.

Ramzi Jammal, CNSC Executive Vice-President and Chief Regulatory Operations Officer, has been elected as President of the Seventh Review Meeting of the Convention on Nuclear Safety. As President, Mr. Jammal will preside over discussions among participating countries on how to improve nuclear safety worldwide through a constructive exchange of views. For more information on Ramzi Jammal’s presidency, read the feature articles.

Highlights from the report

Enhancements to the regulatory framework

The Sixth Review Meeting for the Convention was held from March 24 to April 4, 2014.

The Fifth Review Meeting for the Convention was held in April 2011.

The Fourth Review Meeting for the Convention was held in April 2008.

The Third Review Meeting for the Convention was held in April 2005.

The First Anniversary Report comprises a status of actions on Canada and was published one year after the Third Review Meeting.

The Second Review Meeting of the Convention was held in April 2002. 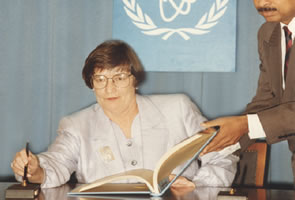 Dr. Agnes Bishop, President of the Atomic Energy Control Board (the predecessor of the CNSC), shown with a member of the IAEA, signed the Convention on Canada's behalf in 1994. Canada was one of the first signatories of the Convention on Nuclear Safety, which came into force on October 24, 1996.

As a result of Canada's obligation as a signatory of the Convention, the first report was produced by the Atomic Energy Control Board (the CNSC's predecessor) on behalf of Canada. The first review meeting was held in April 1999.

National Reports to Extraordinary Meetings of the Convention

Besides holding review meetings, the Convention provides for the organization of extraordinary meetings at the request of contracting parties to discuss specific matters related to the conduct of the review meetings or to discuss important issues that may arise, such as lessons learned from the nuclear accident in Japan.

Besides holding review meetings, the Convention provides for the organization of extraordinary meetings at the request of Contracting Parties to discuss specific matters related to the conduct of the review meetings or to discuss important issues that may arise, such as lessons learned from the nuclear accident in Japan.

The First Extraordinary Meeting was held in September 2009, in conjunction with the Fifth Organizational Meeting of the Convention, to discuss and agree on the changes to Guidelines Regarding National Reports.

No national report was produced for this meeting.

As the federal authority legislated to regulate the production of nuclear energy in Canada, the CNSC is responsible for coordinating Canada's participation at the review meetings and for preparing the national report.

However, the national reports represent a collective work, involving the cooperation of various federal departments and provincial emergency management authorities, as well as input from licensees.

The following organizations are among those that contribute to writing and reviewing these documents.