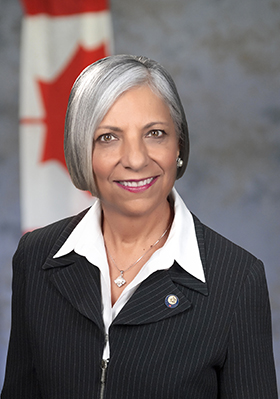 Ms. Velshi has had a long association with the CNSC. She was appointed as a permanent, part-time Commission member in 2011 and re-appointed for a second five-year term in March 2018.

Ms. Velshi has extensive technical, regulatory and adjudication expertise in the area of energy. Throughout her career, she has worked in various capacities at Ontario Hydro and Ontario Power Generation. Ms. Velshi also previously served as a part-time Board member on the Ontario Energy Board, the economic regulator of the province of Ontario’s electricity and natural gas sectors.

Ms. Velshi is very active in the promotion of careers in science, technology, engineering and mathematics (STEM), especially for young women. Since joining the CNSC as President and CEO, she has launched a women in STEM initiative, with the aim of considering ways to support women in STEM careers at the CNSC and elsewhere, and to further STEM education by working with interested partners. She has delivered several international keynote addresses about breaking down barriers for women in STEM, at venues that have included the International Atomic Energy Agency (IAEA) in Vienna and to audiences such as the United States Nuclear Regulatory Commission’s Federal Women’s Program Advisory Committee.

Ms. Velshi was one of the founding members of Canada’s Women in Science and Engineering and served as Vice Chair on the Board of Directors of Scientists in School – a non-profit organization that provides STEM-focused workshops to more than 700,000 students each year. She is the recipient of the 2011 Women in Nuclear (WiN) Canada Leadership Award.

Ms. Velshi was one of 150 Canadian women to have their stories compiled in "Your Turn", a book to mark Canada’s 150th anniversary and inspire the next generation of women leaders.